Targeting all platforms, a hybrid mobile app offers a lot to an app owner and makes the work easier for a developer. It enables single shared codebase for Android, iOS, and Windows

Basically, hybrid mobile app development includes packaging CSS, HTML, and JavaScript code of a mobile application within a “native container”. The native container can run on any operating system or device, without a lot of changes (mainly because of advance frameworks).

The next generation frameworks for hybrid mobile applications have solved some of previous limitations of hybrid apps for developers, including usability, updating SDKs, and access to device APIs to name a few.

The developer must choose the right framework for their hybrid mobile app and maximize its potential to build a smooth and quality hybrid app with less headaches along the way.

I have already written a detailed article on Ionic Framework 4.0. Here’s a list of top 3 hybrid app frameworks that you should try for your next project:

React Native is a popular JavaScript framework for writing real, natively rendering mobile apps for Android and iOS. It is based on React, Facebook’s JavaScript library for building UI. However, instead of targeting the browser, it targets mobile platforms.

Xamarin is a framework to develop a cross platform mobile application using C#; instead of using HTML and JavaScript like many other frameworks.

Popular among developers across the world, Xamarin is different because it offers a single language C# and runtime that works on three most used mobile platforms i.e. iOS, Android, and Windows.

Backed by Microsoft, Xamarin helps developers build a mobile application which looks and feels completely native. Here developer write one C# code base which will have access to all features and are available for native SDK.

These days, PhoneGap is the most popular hybrid framework for mobile cross-platform app development.

Built by the team behind Apache Cordova, the Adobe PhoneGap framework is an open source distribution of the Cordova framework.

Using PhoneGap, developers can reuse existing web development skills to build hybrid applications built with CSS, HTML, and JavaScript for multiple platforms with a single codebase so the app owners can reach your audience; regardless of the type of device they are using.

The core of Apache Cordova apps uses HTML5 and CSS3 for rendering and JavaScript for logic. HTML5 provides access to underlying hardware such as the camera, accelerometer, and GPS.

But browsers’ support for HTML5-based device access is not consistent across mobile browsers. To sole this issue, Apache Cordova embeds the HTML5 code inside a native WebView on the device, using a foreign function interface to access the native resources of it.

Apache Cordova can be further extended with native plug-ins – empowering developers to add more functionalities that can be called from JavaScriptThese plugins allow access to the device’s camera, accelerometer, compass, microphone, file system, and more. 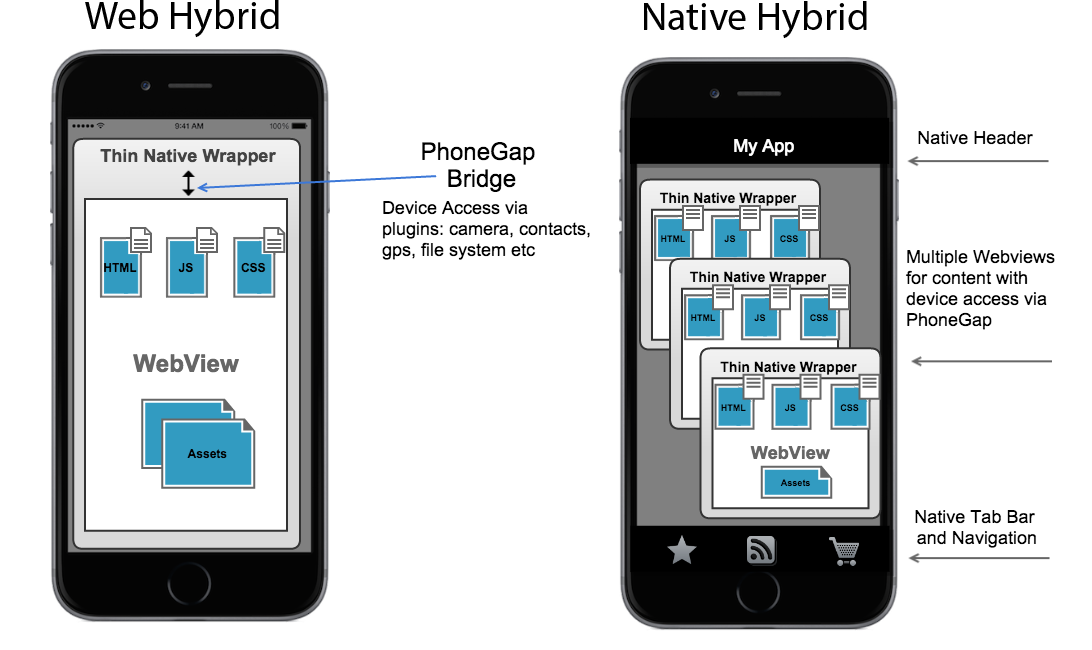 These were top three picks from the plethora of Hybrid frameworks available. Before choosing one for your next project, read the documentation, get an overview of their features and see if the framework aligns with your project requirement.

If you want to build a Hybrid app, get in touch with our team. We will help you build the best hybrid app for you and your business.