How to pick a technology stack for eCommerce Development

With an estimated 20 million+ eCommerce sites globally, each vying for consumer attention, the ability to stand out requires a lot of effort. Offering a well-designed and personalized user experience becomes crucial. Besides, you want to ensure that you use technology that supports your company’s scalability and long-term growth. Mainly if you are a non-tech startup founder, the odds are that choosing the right technology stack for your eCommerce startup is giving you sleepless nights. Some of the many questions that you could be contending with include:

Even before we begin to answer these questions, it will help to understand what really is a tech stack. Simply put, it is a set of tools, frameworks, apps, programming languages, and more that are used to develop a mobile app or a website. While there are several tools and technologies that go in to make a fully functional system, tech stacks can broadly be divided into two major components:

(Caption: The front end is a client-facing set of tech tools in eCommerce development.)

The front-end, as the name suggests, is the interface that your customers see and interact with. The choice of front end almost always means going with the following options:

The importance of back-end technologies cannot be overstated. They power the front-end, help store, and access data, create complex business logic, and more. This is where you need to really choose from amongst the wide range of technologies available. The option primarily has to do with:

(Caption: These are the four most popular operating systems that form the base for the technology stack for eCommerce development.)

The choice of Operating systems essentially boils down to 4 major brands:

Of the four, Android and Windows run neck to neck when it comes to global market shares. While iOS & Linux have significantly lower shares.

While both are open source and free, Apache is a more tried and tested server. Nginx, though newer, is gaining popularity because it can process multiple requests parallelly.

The choice of databases essentially boils down to:

When it comes to storage solutions, you need to choose between AWS S3 from Amazon and Firebase storage from Google.

Major programming languages used in a website technology stack include:

While these may look like a lot of choices, there are several readymade technology stacks that are available. These include:

LAMP however, suffers from the fact that it doesn’t lend itself to the scalability of operations.

The Python-Django framework is mainly known for its high security. Its components include

A popularly used stack, it comprises of the following:

In addition to these popular tech stacks, you can benefit from third-party integrations such as those to do with:

How to choose the right eCommerce stack 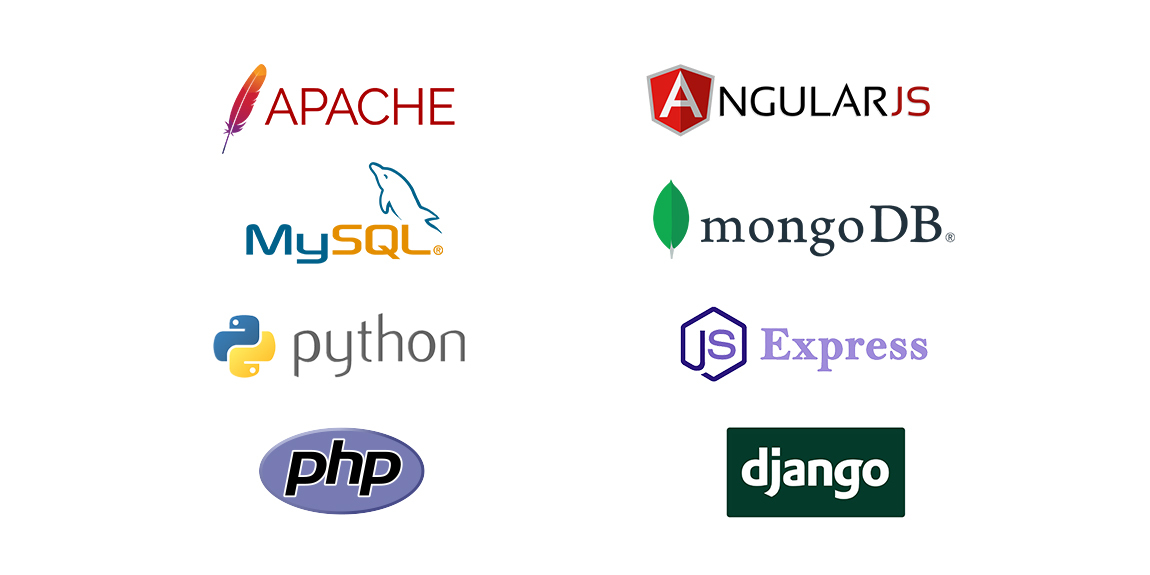 (Caption: There are various factors that help you decide the right tech stack for your eCommerce business.)

In choosing the right tech stack for your eCommerce site, here are the critical factors to watch out for:

If you aren’t setting up your eCommerce portal from scratch, an essential determinant of choosing new tools and platforms is their compatibility with the existing stack.

Scope of your project

The sheer expanse and scope of your project will also help you choose the right tech stack. The solutions for a large eCommerce platform with thousands of SKUs will be way different from a one-pager website. Small projects, for example, tend to benefit from Python-Django or Node.js stack, while MEAN or LAMP stacks work well for medium projects. Large projects with complicated requirements, on the other hand, are known to use Angular-Node.js or Ruby-on-rails.

Basis the scope of your website it will be easy to narrow down your choices. Needless to mention, each of these will have different budgetary implications.

A lot will also depend upon the development time that you have at hand. If you want to test an idea quickly, LAMP maybe your tech of choice. However, if time isn’t a constraint, LAMP may not be your stack of choice, especially since scalability is an issue.

While choosing a stack, it is essential to check if it will offer you scalability without too much investment in time and capital. To achieve good scalability, powerful programming languages like Javascript is an excellent choice as it offers various libraries and frameworks.

With an eCommerce site where you have to deal with sensitive data, the one thing you cannot afford to compromise on is security. Therefore, it is imperative to choose tools that ensure a high degree of security.

It will also help to consider the availability of talent for the particular technology. The thumb rule is that the more user-friendly the technology, the more the number of developers who master it.  Choosing an open-source platform will also ensure extensive documentation and a community available for support. Therefore, with some effort, it will be possible for you to create a great shopping experience for your customers as opposed to creating a cookie-cutter website.  With your tech stack aligned to your business strategy, you are that much closer to success!